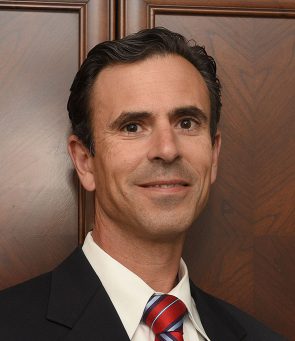 Dr. Cook grew up in Walnut, CA and completed his undergraduate degree at the United States Military Academy at West Point, NY in 1992 with a Bachelor of Science in Biology. Upon graduation from the academy he attended the U.S Army School of Aviation and served as a scout helicopter pilot.

He subsequently attended medical school after being awarded a Health Professions Scholarship and received his Medical Degree from the Western University of Health Sciences in Pomona, CA in 1998.

Following medical school Dr. Cook moved to El Paso, Texas where he completed 5 years of general surgical training at William Beaumont Army Medical center. As a practicing Board Certified General Surgeon he was then stationed at Ft. Benning, GA where he served as the Chief of General Surgery and deployed three times to both Iraq and Afghanistan.

He then returned to southern California and completed his two-year fellowship in vascular and endovascular surgery at University of California – San Diego (UCSD) and Scripps Green Hospital. His vascular training included both surgical and interventional radiological training. After completing his training in 2008 Dr. Cook returned to active duty and moved back to El Paso, TX as a board certified Vascular Surgeon. He held several positions over his 8 years there to include Chief of Vascular Surgery, Chief of the Department of Surgery and served as the Consultant to the Surgeon General for Vascular Surgery. He deployed again two additional times to both Iraq and Afghanistan. Dr. Cook subsequently retired from active duty in the rank of Colonel and moved back to the San Diego area to join Vascular Associates of San Diego.

Dr. Cook is an Assistant Professor of Surgery at both Texas Tech University and Uniformed Services University of Health Sciences and has published multiple articles in peer reviewed journals and presented his research at several national and regional meetings. In addition he has published book chapters on various subjects within vascular surgery.

His major areas of interest are treatment of arterial and venous disease. This includes stent-graft repair of thoracic, abdominal aortic and popliteal aneurysmal disease, endovenous ablation for varicose veins, and open and endovascular treatment of carotid and peripheral arterial disease.